PPM and ORP – Now you can have both!

PPM and ORP – now you can have both!

Even though oxidation-reduction potential (ORP) and PPM (parts per million) are independently used to monitor water quality in public facilities, they are not often used in conjunction. This is surprising because the combined readings can give one the ability to control chlorine levels and continually monitor oxidizing activity.

This article looks at both readings, and makes a case for using PPM and ORP sensors for maintaining optimal water quality in public facilities.

Oxidation-reduction potential (ORP) quantifies the effectiveness and/or quality of the disinfectant present in the water, and has been adopted as a mandatory public health standard for public pools and spas in Germany, Canada and California. The standard is also recognized by the World Health Organization (WHO) and the Center for Disease Control (CDC), and has been used with great success for over 30 years. 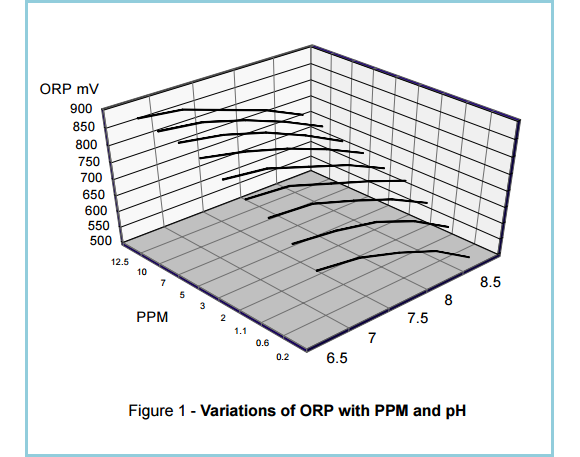 But an ORP reading alone is inadequate for maintaining optimal hygiene in a public facility. One also needs to have constant chlorine concentration readings, typically expressed as a PPM (parts per million) value.

The relationship between ORP and PPM is complex (See Figure 1), so it is worth detailing what each term refers to before looking into this further.

Figure 1. The relationship between ORP and PPM readings is quite complex, as shown in a computer-generated three-dimensional representation of ORP vs PPM and pH readings.

The oxidation-reduction potential (ORP) measures the chemical activity of a sanitizer and its capacity to oxidise contaminants, regardless of the source. It is measured using a high quality electronic ORP probe or meter that generates a millivolt (mV) reading.

Low ORP levels in a pool would indicate the presence of contaminants as they consume dissolved oxygen in the water, thereby lowering the ORP. High ORP levels indicate that the water has adequate levels of disinfectant to oxidise and disinfect any foreign contaminants. ORP levels constantly fluctuate, from the effects of sunlight or high bather load which makes monitoring it essential to ensure consistent disinfection.

ORP has the great advantage of demonstrating the activity potential of an oxidizing sanitizer, however, ORP cannot be used as a direct measure of bacterial contamination within a defined water body. A sudden drop in ORP can indicate a system loading event, however one cannot discern with any degree of statistical confidence that the loading is bacterial in nature.

The great advantage of having a ORP reading is that it is a constant record of sanitation levels for a body of water.

PPM (parts per million) is a ratio used to identify how much chemical sanitizer (typically chlorine) there is in your water. 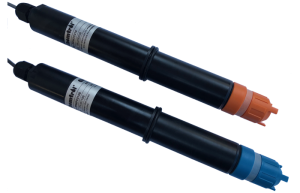 For swimming pools the recommended level of chlorine in your pool water is expressed as a value: 1.0 to 3.0 parts per million (ppm), dependent on the classification of the water body.

When the correct chlorine levels are achieved , the pool is deemed to be effectively sanitized, with the correct residual sanitizer levels maintained. 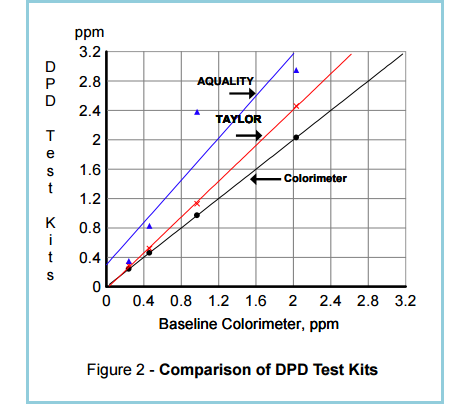 Another significant factor in obtaining accurate readings is the inherent weakness of conventional test kits. They are often subject to user error and give inaccurate readings with individual test kits reacting differently to a range of contaminants.

It is therefore very difficult to obtain reliable readings from test kits (See Figure 2.). At best, they can be used to detect the presence or absence of chlorine.

“Figure 2. shows the results of laboratory testing of chlorinated water with two well-known DPD test kits for free chlorine and with a colorimeter calibrated by amperometry. It can be seen that there are wide differences – more than 50% – between baseline colorimeter and test kits readings.

A study by the Oregon Health Department highlighted that ORP testing provides a reliable index of sanitary conditions in heavily used pools and spas, regardless of sanitizer concentration, pH level and contaminants. In clean and relatively clean water, the ORP and test kits methods are complementary because the activity of a sanitizer depends primarily on its concentration. In other words ORP and PPM can be correlated (See Figure 3.). 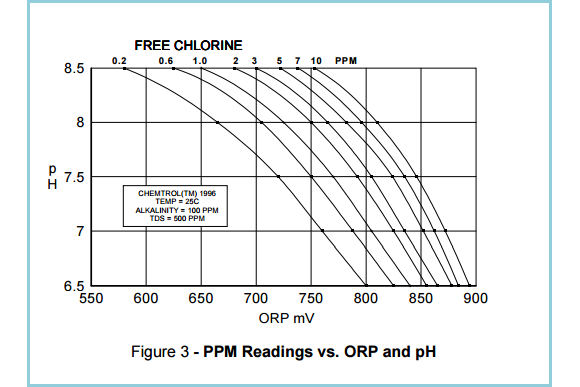 As shown in Figure 3, the most important factor affecting sanitizer activity is pH, because it changes the concentration of the active form of free chlorine, hypochlorous acid, HOCl. As a result, chlorine and bromine become less effective at higher pH.

This is why it is essential to maintain a stable pH value of 7.4 to 7.5

PPM or ORP: Which Should Be Used?

Dr. J. Steininger, founder of Santa Barbara Control Systems, published in Swimming Pool/Spa Age called: “PPM or ORP: Which Should Be Used?”. The article contributed greatly to the recognition and use of ORP for chemical automation in swimming pools and spas, and is still relevant today.

It also details how using PPM and ORP sensors can give one the ability to control the chlorine residual and monitor oxidizing activity, and have the best of both worlds.

“ORP has the great advantage of showing the activity of an oxidizing sanitizer – such as chlorine or bromine. Because it shows the effects of pH and cyanuric acid on the effectiveness of the sanitizer and correlates very well with its bactericidal activity, it has become an invaluable tool for proper water sanitation.
However ORP sensors cannot show chlorine concentration. Approximate values of PPM (parts per million) or mg/l (milligrams per liter) values can be derived indirectly through algorithms or more precisely with amperometric sensors. The problem is that these sensors are expensive and difficult to use because they require special pressure cells and expendable reagents.

Unlike conventional amperometric sensors, CHEMTROL solid state PPM sensor is simple to install and operate because it does not require expensive reagents or special flow cells.
A significant advantage of the PPM sensor is that it’s not affected by cyanuric acid (CYA) and/or oxidizers, thereby assuring constant readings of Total Chlorine at all times. Extensive testing has shown that this sensor is very accurate and reliable.

IS ORP CONTROL OBSOLETE?  Absolutely not!

With the new PPM sensor, the operator can now control both free chlorine and ORP. 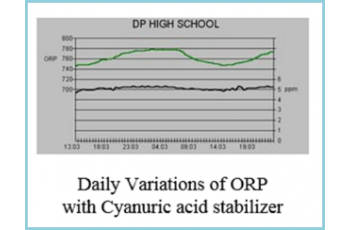 The DP High School graph below shows the data log for a CHEMTROL® PC6000 controller using a solid state sensor for PPM control.

The ORP variations show the diurnal effects of sunlight in a cyanuric-stabilized pool.
During the day, the chlorine decomposes more rapidly under UV radiation and the ORP decreases accordingly. At night, the ORP increases again. At all times though, the Free Chlorine level remains stable.
Another advantage of the new PPM sensor is that the two control modes can be used simultaneously with PPM control for chlorine and ORP control for an oxidizer, such as Potassium Monopersulfate, to eliminate chloramines.

” For the first time in automated water treatment, the combination of PPM and ORP (Oxidation-Reduction Potential) sensors gives the operator the capability to control either chlorine residual or oxidizing activity. The sensor readings can be displayed in parts per millions (PPM) or milligrams perliter (mg/l). They can also be used to control Total Chlorine levels in water.”

Source: ORP CONTROL IN POOLS AND SPAS and PPM or ORP: Which Should Be Used?, J. Steininger